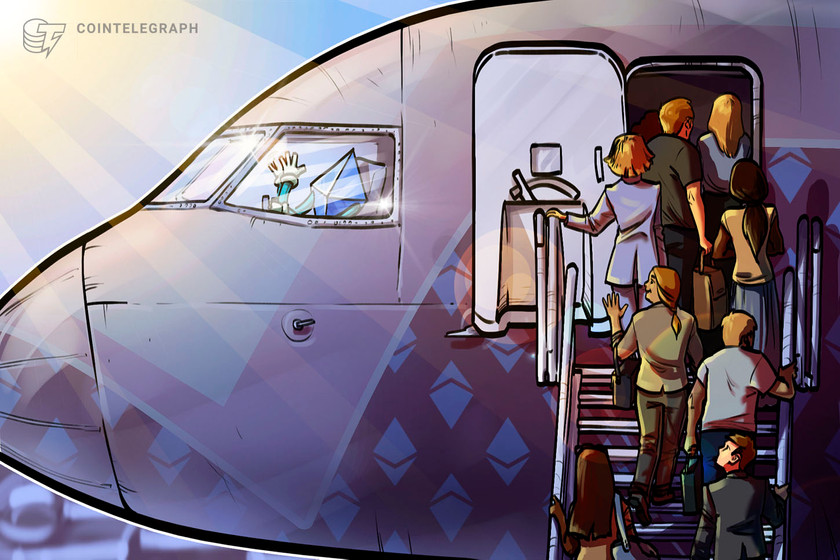 Ethereum price is closing in on $600 and multiple metrics suggest the top altcoin is ready to notch a new all-time high.

Ether (ETH) price might have had a disappointing week after its price failed to hold the $600 level, but the fundamentals of the network and cryptocurrency remain solid. Traders are known for having short memories so it’s worth mentioning that Ether price is still 45% higher than it was in the previous month.

To understand whether the recent correction reflects a temporary consolidation or an effective ceiling caused by the lack of adoption, it’s helpful to gauge the metrics which reflect network usage on the Ethereum network.

A good place to start is analyzing transactions and transfer value.

The chart above shows just how strong the growth of transactions and transfers were in late-November when Ether price was trying to break its $600 top. Although there hasn’t been a significant drop in the indicator, it signals that the current $550 price level is in line with the blockchain activity.

Increasing withdrawals from exchanges can be caused by multiple reasons, including staking, yield farming and buyers sending coins to cold storage. Meanwhile, a steady flow of net deposits indicates that there is willingness to sell in the short-term.

The strong net outflow initiated in August lasted for three months and resulted in 4.3 million Ether being pulled from exchanges. Regardless of the reason behind the withdrawals, the movement ceased in mid-November, and this was an indication that investors’ short-term willingness to reduce their positions as ETH surpassed $420.

On Dec. 5, as Ether began displaying signs of weakness, deposits on exchanges became less frequent. Thus, over the past week, withdrawals surpassed deposits by 32,000 Ether. This metric corroborates the thesis of traders’ unwillingness to sell at current price levels.

The futures premium has normalized after reaching a peak

Professional traders tend to dominate longer-term futures contracts with set expiry dates. Thus, by measuring how much more expensive futures are versus the regular spot market, a trader can gauge their bullishness level.

The 3-month futures should usually trade with a 1.5% or higher premium versus regular spot exchanges. Whenever this indicator fades or turns negative, this is an alarming red flag. Such a situation, also known as backwardation, indicates that the market is turning bearish.

The above chart shows that the indicator briefly touched 4.5% on Dec. 1 but later adjusted to 2.5% as Ether stabalized near the $550 support. Regardless of the drop, it has held above the minimum 1.5% threshold, indicating optimism from professional traders.

This shows that, despite the recent price weakness, professional traders remain confident in Ether’s bullish potential.

Although the recent volumes have been below average, traders should remember that Ether faced a heavy battle as it tested the $600 level. Thus, some accommodation on lower volume was expected until a definitive cycle low is set.

Besides, the current weekly $900 million average daily volume mimics mid-November figures. Nevertheless, traders will only be confident on price recoveries accompanied by daily trading volumes that surpass the $2 billion mark.

By measuring whether more activity is going through call (buy) options or put (sell) options, one can gauge the overall market sentiment. Generally speaking, call options are used for bullish strategies, whereas put options for bearish ones.

A 0.70 put-to-call ratio indicates that put options open interest lag the more bullish calls by 30% and is therefore bullish.

In contrast, a 1.20 indicator favors put options by 20%, which can be deemed bearish. One thing to note is that the metric aggregates the entire Ether options market, including all calendar months.

Considering that the current Ether price is up 45% from a month ago and that investors have been buying more neutral-to-bearish option strategies, the current scenario seen in Ether is not really that worrisome.

Investors are not overly excited, but also not bearish

Overall, each of the five indicators discussed above has held steady within a neutral-to-bullish range, especially considering the market recently tested sub-$540 levels.

As Etherp price struggles to retake $580, investors may begin to second-guess the odds of a short-term bull run.

At the moment, there has not been an indicator that is ringing the alarm bell. Thus, the recent negative price fluctuation should not be considered a trend reversal.