The US dollar is on track for its most significant monthly performance since July 2019. But it continues to feel the pressure from its all-time bearish outlook.

A monthly chart of the US dollar index (DXY), a barometer to gauge its performance against a basket of top foreign currencies, shows the greenback in a lifelong downtrend. So it appears, the index has been trending lower inside a Descending Channel, as confirmed by more than two lower highs and lower lows. 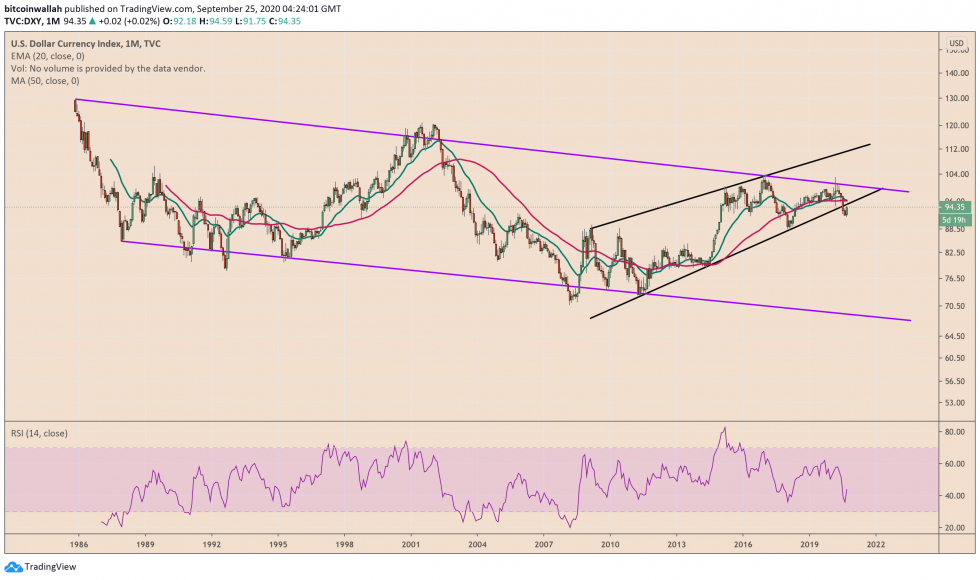 DXY pulls back after testing the upper trendline of the giant Descending Channel. Source: TradingView.com

The purpled area shows a retest of the upper trendline for a breakout in March 2020, followed by a strong rejection.

It was not the US dollar’s first attempt to break over the Channel resistance; the greenback has been seeking a bullish move since 1985. Nevertheless, it has failed every time, with a few successful breakouts turning out to be fake.

The technical fractals alone leave the US dollar in a very bearish state.

It is also because of the greenback’s medium-term outlook. As the chart shows, DXY lately broke out of its prevailing Ascending Channel (black) to the downside. The index invalidated the support trendline that had helped it maintain its bullish bias since April 2011.

DXY pulled back by 2.38 percent so far into the September 2020 trading session. Nevertheless, the index showed signs of weakness near the Ascending Channel support, hinting that it could either consolidate ahead or move lower towards the ‘purple support’ as it has done in its 25 years of trading.

Bitcoin vs the US Dollar

A Bitcoin price chart (BTC/USD) looks an exact opposite of the one of the US dollar index. A younger asset, nevertheless, the world’s first decentralized cryptocurrency has logged two bullish cycles in the past, returning exponential gains of up to circa 886,000 percent. After setting a top near $20,000, BTC/USD has undergone a long consolidation trend but has traded near the upper trendline of its sideways channel.

Bitcoin’s relevance as an investable asset grows because of its scarcity. Speculators look at the cryptocurrency as their backup plan against the US dollar’s long-term bearish outlook. A majority of them are retail traders/investors whose savings have gone down due to the unlimited supply of the greenback.

The same trend is brewing after this year’s COVID pandemic. As the economic recovery slows down to dangerous levels, the Federal Reserve has committed to maintain ultralow lending rates and raise their inflation targets beyond their 2 percent benchmark.

The fundamentals ensure the US dollar will find it difficult to break above its purple resistance trendline in the months ahead. Meanwhile, flight to safety into Bitcoin could help it continue its long-term uptrend.

Q3 was a tough quarter for mining rig manufacturers as the impact of COVID-19 continued to weigh. The stock...

Taking U.S. dollar devaluation into account, gold has still not reached the all-time price high it set in 1980....

He believes that investors will eventually send Bitcoin’s price over $500,000. Not one to mince words, Tyler Winklevoss reportedly told...

A likely “stop-loss run” triggers a one-minute candle to more than $3,000 lower than Bitcoin spot price before a...

Q3 was a tough quarter for mining rig manufacturers as the impact of COVID-19 continued to weigh. The stock...

Taking U.S. dollar devaluation into account, gold has still not reached the all-time price high it set in 1980....

He believes that investors will eventually send Bitcoin’s price over $500,000. Not one to mince words, Tyler Winklevoss reportedly told...