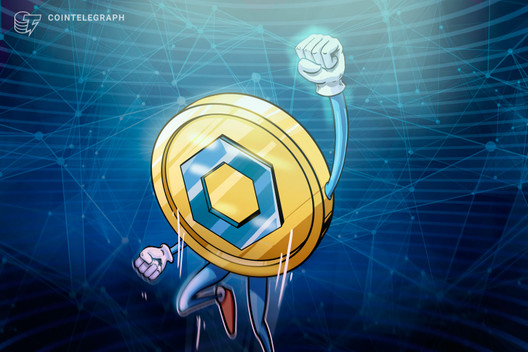 The price of Chainlink has climbed to new heights as LINK continues to be one of the strongest cryptocurrency market performers of 2020.

Without a doubt, one of the best-performing cryptocurrencies in the past few years is Chainlink (LINK). In recent days, the cryptocurrency surged from $6.80 to $9.30 capping a 40% percent move and becoming the number nine cryptocurrency by market capitalization.

Can Chainlink continue moving upward and even reach the magical number of $10 or higher? Chainlink rallies with 41% since the crash last weekend

As most of the cryptocurrencies saw a massive crash at the weekend, Chainlink did the same. The price of Chainlink dropped from $8.75 to $6.90, all the way toward the support level of the range it was in. Since that drop, the price of Chainlink immediately bounced back heavily and tested the resistance at $8.75 again. Only this time the resistance broke down and the price rallied toward $9.60, a new all-time high.

What are the crucial levels to watch for Chainlink?

These are defined using the following chart, in which the crucial support and next target zones are shown. The crucial support level is defined by the previous resistance zone at $8.75. The market and traders want to see a support/resistance flip of this level, confirming that new buyers are stepping in.

Such a support/resistance flip would warrant further upward momentum. The next resistance and target zone is $10.40, using the Fibonacci extension tool.

If the 2.618 Fibonacci level is taken, the next resistance zone is found at the $12.50 level. When assets or cryptocurrencies are in price discovery (without any historic price data at given price levels), the Fibonacci extension tool is a great asset to identify new target zones.

However, once the support/resistance flip fails, this upward breakout above $8.75 can be classified as a fakeout. In this scenario, Chainlink goes back in the range between $7 and $9. After such a fakeout, a test of the range low would be likely, which in this case is found at the $7 level. As stated in the previous article, the likelihood that earlier levels get tested for confirmation of support is quite high after such a massive surge.

Since that test, Chainlink’s price has rallied by 42%, straight into the current resistance zone. Next to that, the 100-day and 200-day moving averages (MAs) are still acting beneath the current price, which is a bullish argument for continuation.

The most likely scenario for Chainlink at this point is a pause to the rally. A very probable scenario would be ranging between 0.00060000 and 0.00090000 sats before the next big surge occurs.

Through such a range-bound construction the price can stabilize and find strength for a further surge and rally towards $12 and higher. As Chainlink’s price is acting inside a resistance area, it’s crucial for LINK to sustain support at 0.00085000 sats.

If that level is lost, the next big pivot is at the 0.00074000 sats level. Holding this level as support would likely lead to range-bound action as defined in the chart.

An apparent breakthrough of the 0.00085000-0.00088000 sats area would warrant a new test of the highs and possible continuation towards a new all-time high.

The great unbanking: How DeFi is completing the job Bitcoin started

While most of us will prefer to forget the horrors of 2020, DeFi may well prove to be the...

The U.S. Office of the Comptroller of the Currency (OCC) on Monday published a letter clarifying that national banks...

Web3 Foundation has an established history of offering grants of up to $100,000 for groundbreaking technologies. Decentralized finance startup...

Earth is reaching a historic “inflection point,” Keiser warns after Singapore’s central bank admits that more debt is not...

On a macro scale, Bitcoin has yet to break out. Despite surging around 20% in the past 1.5 months,...

Ripple is slowly moving into a positive zone above the $0.2480 support zone against the US Dollar. XRP price...

Bitcoin price corrected lower, but it found support near the $10,750 zone against the US Dollar. BTC is currently...

Tether supply surges to $15 billion but it could still be a house of cards The surging DeFi sector...

Bitcoin has flirted with falling under $10,000 multiple times over the past week. If you take a look at...

The great unbanking: How DeFi is completing the job Bitcoin started

While most of us will prefer to forget the horrors of 2020, DeFi may well prove to be the...

The U.S. Office of the Comptroller of the Currency (OCC) on Monday published a letter clarifying that national banks...

Web3 Foundation has an established history of offering grants of up to $100,000 for groundbreaking technologies. Decentralized finance startup...