Bitcoin has remained caught firmly within the throes of its long-held consolidation phase in the lower-$9,000 region.

It is now expressing some signs of weakness due to its inability to surmount the slight resistance that sits around $9,300, but it remains unclear as to whether or not sellers are strong enough to catalyze a downtrend from here.

There are a few factors that are currently playing into bulls’ favor, however, and BTC’s lackluster consolidation phase may prove to be short-lived.

In addition to recently breaking above a descending trendline, the crypto has also seen a sharp decline in its funding rates, as well as rising perpetual swaps premiums on BitMEX.

One analyst contends that these three factors will provide the crypto with a significant boost in the days and weeks ahead, potentially helping to put an end to the digital asset’s long-held consolidation phase.

The next movement seen by BTC is likely to be quite large as well, as there is currently close to $3.3 billion in aggregated open interest for the crypto across all the major trading platforms.

At the time of writing, Bitcoin is trading down marginally at its current price of $9,260. This is around where it has been trading throughout the past several days and weeks.

It does appear that it is losing its strength as it continues trading around its current price level, as bulls have faced multiple rejections at $9,300 over the past day.

If they are unable to garner enough buying pressure to shatter the slight resistance sitting at this level, it could be a sign that a significant price decline is imminent.

One factor that could suggest that the next movement Bitcoin makes will be massive is its rising open interest.

Across all platforms, there is currently close to $3.3 billion in OI, which will act as kindling to fuel the next move.

One analyst spoke about this in a recent tweet, saying:

“BTC keeps flirting with 3.3B open interest, but it still hasn’t made a decision.” 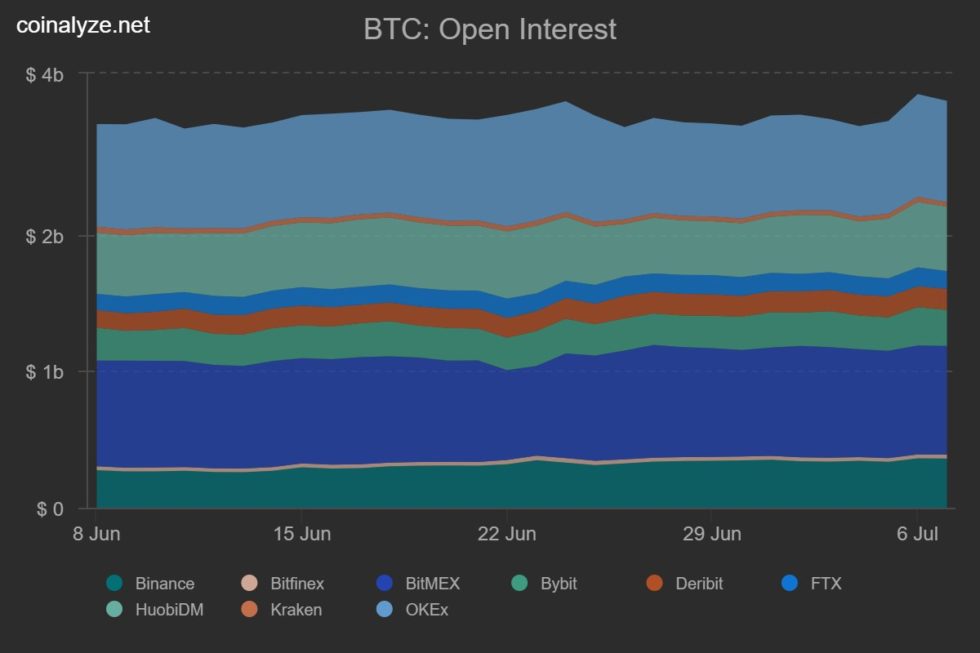 There appear to be three primary factors that are currently working against bears that could provide Bitcoin with some lift in the days and weeks ahead.

The same analyst who pointed to BTC’s rising open interest explained that a descending trendline break coupled with negative funding and a rising perpetual swap premium on BitMEX suggests the crypto is bound to see some upside.

He offered the below chart showing these factors:

For Bitcoin to see any clear momentum, it is imperative that its bulls decisively shatter the resistance that has been established around $9,300.