Nonetheless, BNB stated on its path upward, closing each daily session at a new high. For instance, on April 5, the Binance token reached $381. A day later, it breached the $400 mark, and today, it established a new high of $415. That pushed BNB up by 70% in a month and by 964.63% on a year-to-date timeframe. 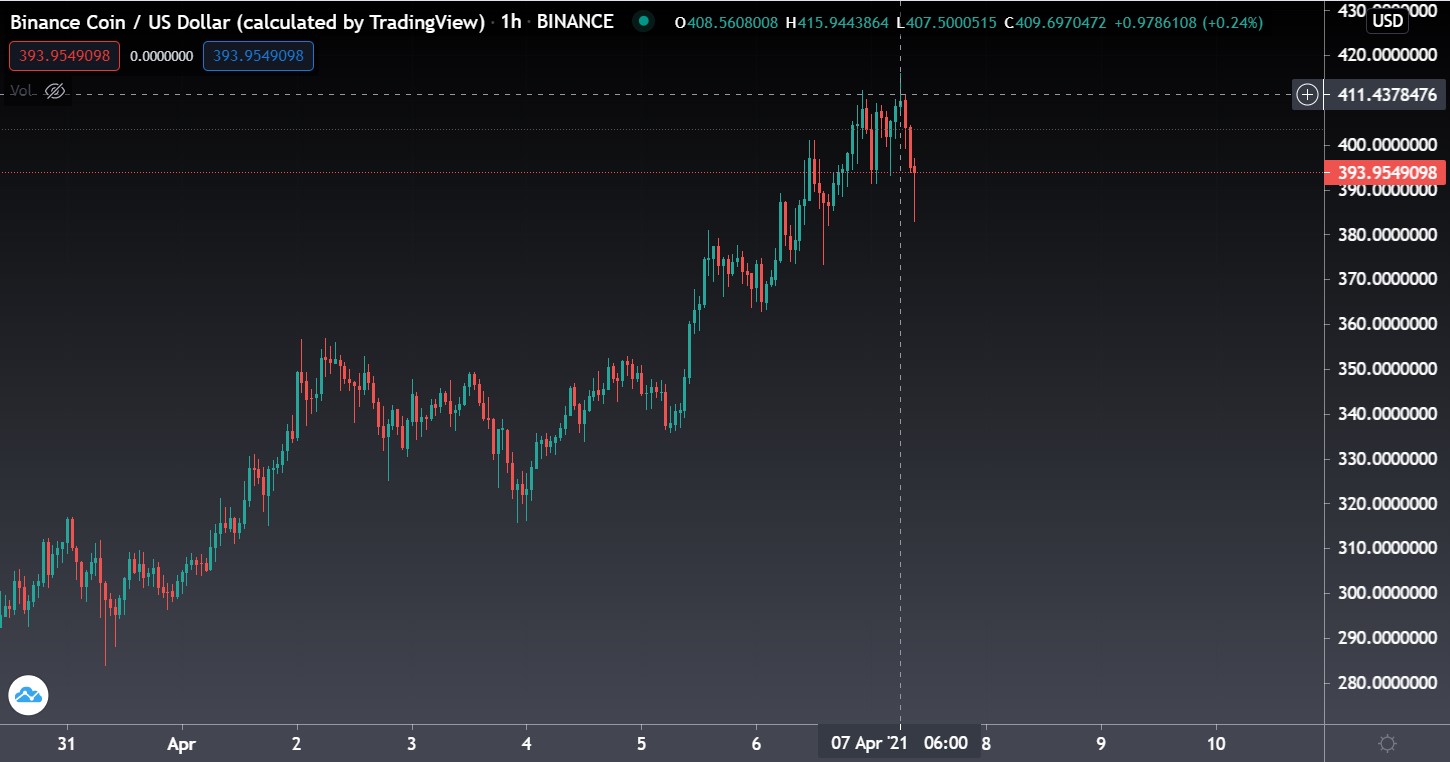 Binance Coin showed steady growth till mid-February before taking a fall just after ‘Bloody Monday.’ Prices plunged below the $200 mark in the following weeks. It did gain some ground later. However, its recent growth spurt began on March 25.

“According to Binance, as of April 5, the number of active addresses in a single day on the BSC reached 370,000, which is 1.1 times more than Ethereum. The 24-hour on-chain transaction volume exceeds 3.9 million, which is more than 300% of Ethereum.” Colin Wu, the Beijing-based journalist, tweeted.

Binance, the world’s largest crypto exchange by volume, launched Binance Coin in July 2017. It can be used to trade and pay fees on the crypto exchange. In the beginning, it worked on Ethereum and later migrated to its in-house blockchain, the Binance Chain.

What’s the Fuel Behind BNB’s flight?

Binance Coin has outperformed major assets to become the third-most valuable cryptocurrency by market cap. The trading volume of BNB, which witnessed an overall surge in the last three months, further attests to its growth as a popular token among traders heading into the second quarter.

BNB’s trading volume passed the billion-dollar milestone for the first time in 2021. Since then, it has fallen below the mark only twice.

Binance users get incentives on using Binance coins. They can also stake the native currency to earn rewards and participate in new token listings through Binance Launchpool.

New listings and partnerships also give Binance, and consequentially BNB, a boost. These new projects often require users to transact using BNB. The world’s largest crypto exchange has also increased project development efforts in the Decentralized Finance(DeFi) sector. The company has its own decentralized exchange, the Binance DEX.

The surging value of BNB is also a reflection of the increasing number of services and applications that Binance has launched. This includes Binance Pay and Binance Card, which allows users to pay merchants or individuals in crypto.

The outlook for BNB looks good for now. The fluctuations in Bitcoin and other cryptos have not affected it much. While Bitcoin has not broken the $60,000 mark since mid-March, Binance Coin has shown prodigious growth in the same period.

Photo by Yosh Ginsu on Unsplash

Many cryptocurrency enthusiasts suddenly express an interest in the xMoon exchange. Ever since Reddit introduced its native MOON currency,...

Dogecoin (DOGE), a community-driven meme-coin cryptocurrency that initially started as a joke, has rallied by a staggering 40 percent...

London (CoinChapter.com) — Cardano is a cryptocurrency network and an open-source project that runs a public blockchain platform.

Yerevan (CoinChapter.com) — It was not easy for XRP to come out of the fear, uncertainty, and doubt created...

Is Holo (HOT) a Good Buy After Latest Price Dip? Find Out

Belgium (CoinChapter.com): Many cryptocurrency enthusiasts show excitement toward WIN, the native currency of the WINk project. As most of...